The GST council has notified that every taxpayer with an aggregate turnover above INR 500 crores in any financial year from 2017-18, will have to implement E-Invoicing. Under this, the taxpayers have to generate invoices on their internal systems (ERP/accounting/billing software) and then report it online to the ‘Invoice Registration Portal (IRP). The IRP will validate the information provided in the invoices and return the digitally signed e-Invoices with a unique ‘Invoice Reference Number (IRN Number)’ along with a QR Code in JSON format to the taxpayer. The signed QR Code to the image generated by IRP has to be printed on the invoice copy shared with the buyer. In this article, we will help you understand.

What Is QR Code?

The term "QR code" stands for quick response code. It is a two-dimensional barcode that is printed on merchandise to provide data in a machine-readable format.

A quick Response (QR) code is a matrix barcode (or two-dimensional barcode) which is an optical label readable by machines thru IRN scanner. It contains information about the item to which it is attributed like a sample e invoice with QR Code. Under e-Invoicing, the QR code is digitally signed and sent along with the e-Invoice by the Invoice Registration Portal (IRP) to help users verify the details in the invoice thru the IRN code scanner. The E invoice QR code scanner online code is in Base64 form and can be used by the taxpayer to print the QR code on the invoice copy. Sample QR code when printed: 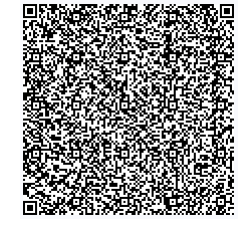 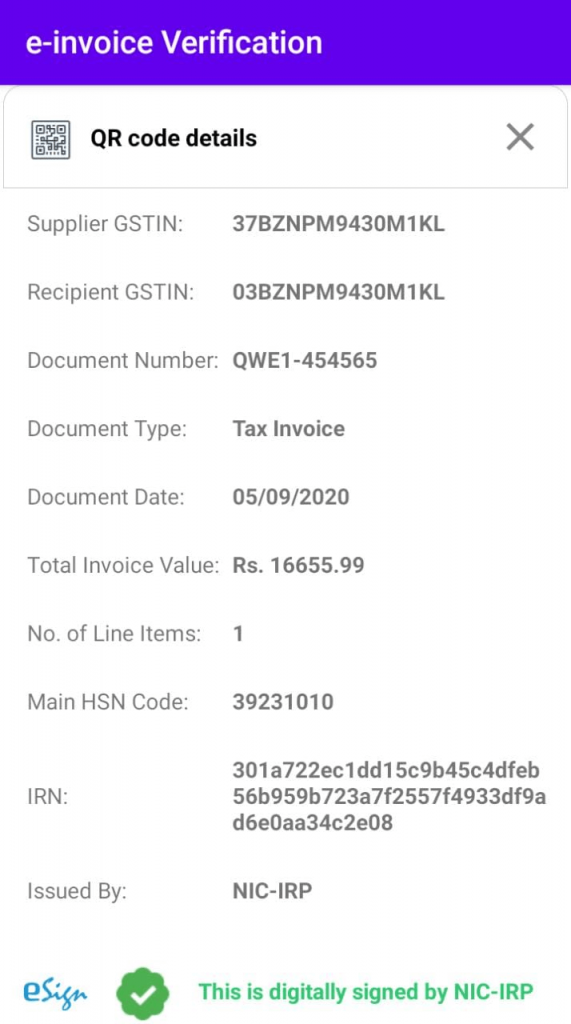 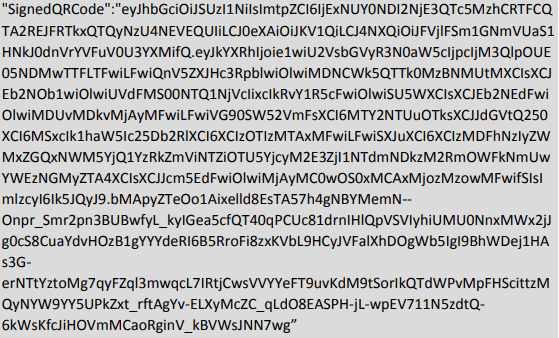 Image Source: https://einvoice1-trial.nic.in/Documents/Qrcode_procedure.pdf Signed QR code is in the form of JWT and has 3 parts:

Which Details Are Available Within The QR Code?

The QR code consists of important invoice parameters like:

When Would The Signed QR Code Be Available?

When a taxpayer reports an invoice to the IRP, the IRP system will provide a ‘Signed QR Code’ as part of the response along with the IRN. If the content of the QR code tampers, the e-Invoice will become invalid, and the signature verification will fail under e way bill barcode scanner and IRN QR code scanner.

How Is The QR Code useful?

The QR code will provide information about the details present in the invoice the IRN number scanner is attached. With this, taxpayers/tax officers can:

How To Verify The QR Code?

Taxpayers/suppliers/buyers can verify the QR code. Also, the tax officers can validate the details in the invoice through this code and be sure that the invoice is correctly reported to the IRP and is accepted by it. The QR code can be verified using the offline app provided on the IRP.

Though B2C invoices are not under the purview of e-Invoicing, GST registered taxpayers with an annual aggregate turnover of more than INR 500 crores in any financial year from 2017-18, have to generate dynamic QR codes for B2C invoices too, from 1 December 2020. It has also been clarified that, if a Dynamic Quick Response (QR) code is made available to the recipient/buyer through a digital display with payment cross-reference, such B2C invoices shall be considered to be having a Quick Response (QR) code. The provisions applicable to B2C and B2B invoices are different. For B2C invoices:

The motive behind the inclusion of QR codes in B2C invoices is to promote digital payments on a large scale.

E-Invoicing API
Use GST E-Invoice APIs to build your own E-Invoicing application.
Check out other Similar Posts