What is GST network or What do you Mean by GST Network?

With the implementation of GST (what is gstn), the entire indirect tax structure has been subsumed under one administration, which obtains, measures, and records tax filings made by taxpayers. GSTN meaning or GSTN full form is Goods and Services Tax Network (GSTN)  is the resolution of this regularity. GSTN provides the necessary IT infrastructure to file returns, maintain payments of indirect tax liabilities, and accomplish other compliance. It is supported by the NIC (National Informatics Center).

The structure of GST network pdf is as Private players own a 51% share in the GSTN, and the government owns the rest. The authorized capital of the GSTN is Rs 10 crore (US$1.6 million), of which 49% of the shares are divided equally between the Central and State governments, and the remaining is with private banks. Now, we will discus vision and mission of GSTN.

Vision and Mission of GST Network

The view of the GST network structure is to intensify an entrusted National Information Utility (NIU), which presents a strong IT determination to ensure the efficient functioning of the GST regime. This approach was built so that the taxpayer can view a “One Nation One Market” with less compliance cost as the powers and functions of GSTN.

The mission of the GSTN include:

Shareholding and Organization Structure of GSTN

An essential share of the shareholdings in the GSTN, i.e., 51%, is cumulatively maintained by private companies. The Government of India holds the remaining shares. The total capital of the GSTN is around 10 Crore INR, but there is a recommended non-recurring grant of 315 Crore INR. Shareholding pattern of GSTN: 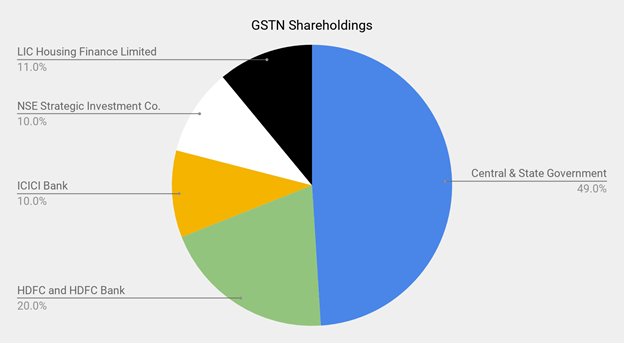 There are several completed and ongoing projects under the wings of GSTN. The panel is apparent on the GSTN portal, as shown below: 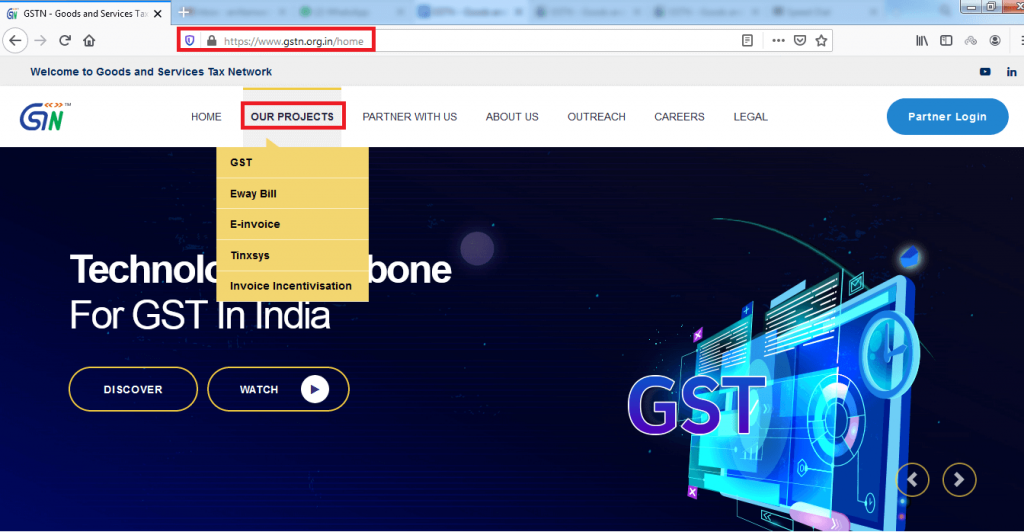 GSTN obtained an IT system to control the various tax systems of all Indian States and Union Territories and provide a single interface for more than a crore taxpayers’ for their GST compliance functions. Here we discuss some of the functions of GST network :

IT structure for GST. 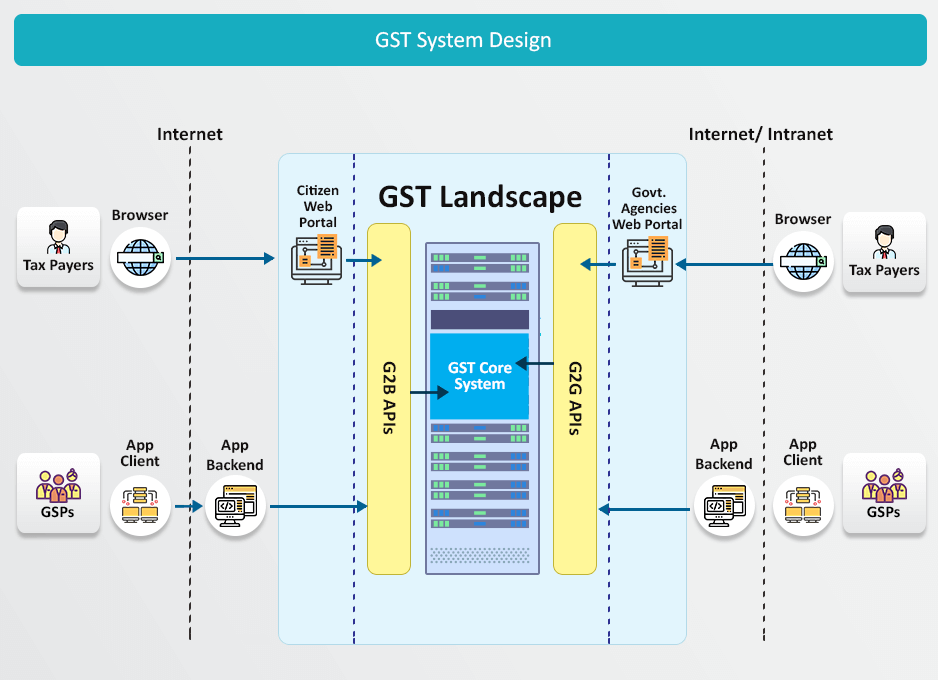 GSTN generated the e-way bill IT structure for taxpayers who move consignments charging INR 50,000 or more to generate e-Way invoices digitally without any trouble. The purpose of injecting the e-Way bill was to have a powerful tool to track the movement of goods and check tax avoidance. Furthermore, a centralized procedure to e-way bill generation through the e-Way Bill portal reduces ambiguity. IT structure for e-Way bill: 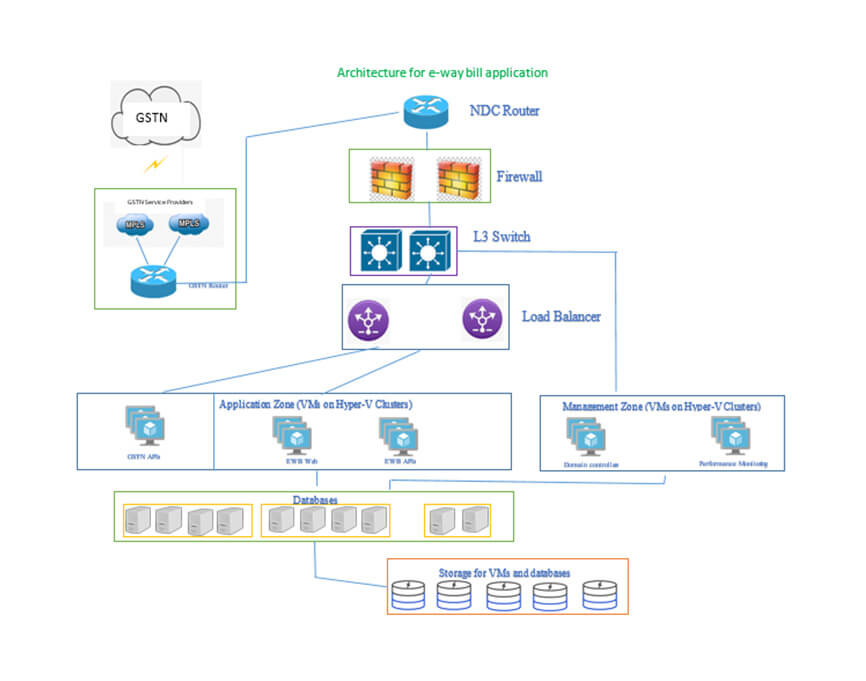 In the 37th GST Council meeting held on September 20 2019, it was recommended to introduce e-invoicing. Today, e-invoicing will be implemented from October 1 2020, for taxpayers whose aggregate turnover (based on PAN) is more than INR 500 Crores in the preceding financial year. With the mechanism in point, business-to-business interaction can develop because of decreased transcription errors and costs involved. Moreover, the transfer of documents between suppliers and buyers will get in order. Apart from laying down e-invoice schema, GSTN has installed Standard e-Invoice Messaging Protocol (SIMPOL) that assures:

TINXSYS (Tax Information Exchange System) promotes data interchange between Commercial Tax Departments (CTDs) of all States for the more reliable and efficient administration of inter-state trade. Considering this system functions as a data repository, it can also help the CTD officials verify the details of dealers located in various states and the statutory forms submitted to strengthen their claim for concessions. Apart from this, TINXSYS also presents Management Information System (MIS) and Business Intelligence reports to CTD(s) and the Empowered Committee of State Finance Ministers (EC). These reports support controlling the inter-state trade/movement. Next will know about the functions of the GST network. Functioning of TINXSYS Application: 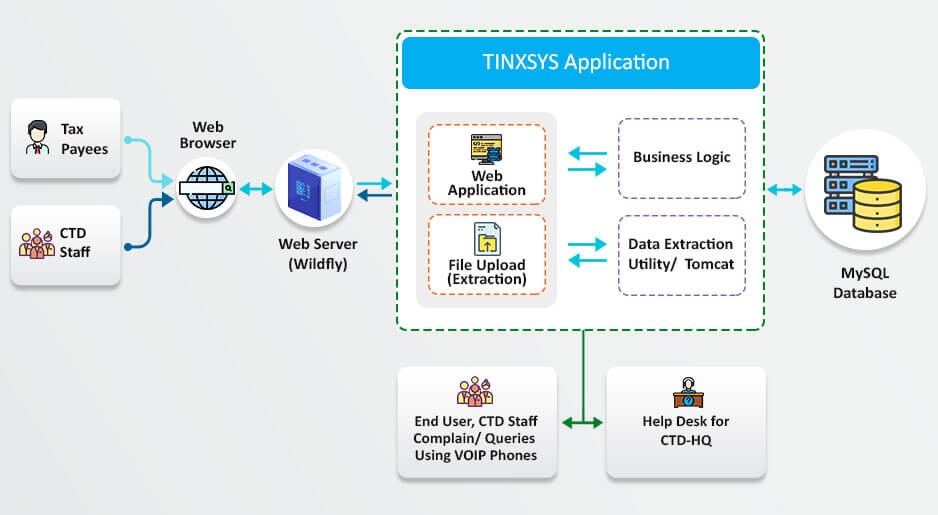 Under the ‘Mera Bill Mera Adhikaar’ scheme, citizens are prompted to ask for original invoices from the sellers charging GST. The main motive here is to promote tax compliant behaviour even in B2C transactions. GSTN in collaboration with M/s e-connect Solutions Pvt. Ltd produces a user-friendly mobile application and portal to empower citizens to register themselves and upload invoices related to the transaction. This statement/portal will recover all the needed data from the uploaded invoices, like the GST Identification Number (GSTIN), invoice number, amount paid and tax amount. Consequently, a lucky draw will be established at the end of every month, wherein a few lucky invoices will be rewarded. This is an effort to provide honest taxpayers with an incentive for their compliant behaviour.

The principal motivation behind the GSTN is to implement an Information Technology framework to the GST system. The fundamental structure needed for such an extensive arrangement of vendors, tax specialists, taxpayers requires a safe and secure method. Therefore, an attached formation like the GSTN was set up.

Since such an enormous and complicated structure covering the whole nation was being set up, the parties that would need to access this data was huge – Central Governments, State Governments, and banks, including RBI. This dimension of data sharing – reliably and securely, can only be performed with a dedicated tax network. Therefore, the GSTN was built to present the nation with a preserved data distribution system.

With the Digital India movement, numerous new computerized applications and services have sprung up to support businesses. The GSTN is the framework of these services when they relate to GST and its associates. The government has urged further advanced applications to be performed along with the GSTN.

The GSTN authorizes several partners to do innovative work on tax evaluation and data exploration. That delivers into account the making of best practices and industry norms. Because GST is in the nascent platform, the more analysis and development is done, the more beneficial it is for the economy.

Digital frauds are common in this digital world. Hackers mangle languages to obtain multiple sources, including sensitive data. Therefore, to withstand any cyberattacks, a robust Information Technology foundation is required. Having this in thought, the GSTN has retained data assurance as one of its fundamental principles.