In this article, we will learn about the brief history of GST, how and when GST was started. GST stands for the Goods and services tax in India. It is an indirect tax that is imposed on the supply of goods and services.

The Central Government in 2003 created a Fiscal Responsibility and Budget Management taskforce that suggested replacing the old indirect tax regime with the GST on the supply of all goods and services in 2004.

Union Finance Minister in his 2006-07 Budget speech articulated the movement towards the GST. Originally, it was decided to introduce GST from 1st April 2010.

Then after all the discussion, the central government proposed GST W.E.F from 1st July 2017.

Let us understand the GST journey in brief using the image: 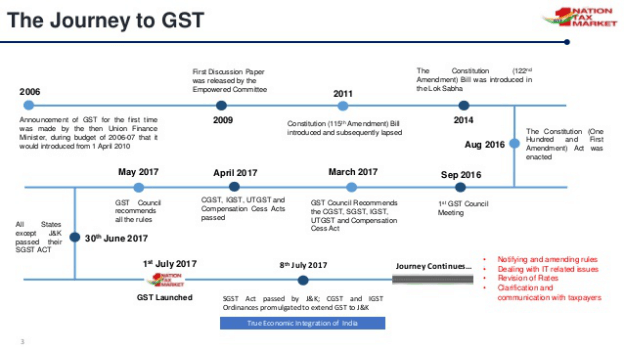 GST replaced all the multiple flowing taxes that are levied by the central and state Government. It came into existence from July 1 2017. It is one indirect tax for the entire country.

GST has subsumed the number of indirect taxes such as:

It provides numerous benefits to the Government, consumer as well as for the business class as it is one indirect tax which provides easy administration to the Government. It provides relief in overall tax burden. The luxury items are taxed more and the basic goods are tax-free for the consumers. It helps the businesses in easy tax compliance and better decision making and investments are done by the corporate.

As it is mentioned above that GST stands for one tax payment from consumer end as the payment is made to the last supplier of the chain. Though it has been attained that this tax is the most benefiting tax introduced till now after the independence at it is for the people and one can enjoy the cancellation on all the indirect taxes on goods and services organized or imposed by the central and state government.

Before understanding the functioning of GST it is important to understand the deep analysis that how the indirect taxes worked before the implementation of GST.

The constitutional law of Indian democratic divided all the indirect taxes in-between state and central government itself. The only issue with those indirect taxes was that one has to pay tax on tax which is now has been suspended after GST has been implemented. Some of the important GST benefits are:

With the introduction of GST in India, the government is trying to make India a common market with common tax rates and procedure.

GST has successfully removed the cascading effect by subsuming all the indirect taxes and allowing set-off across the entire value-chain.

GST has even helped in eliminating the majority of Indirect taxes by subsuming them.

GST has even helped in boosting the make in India initiative by making goods and services competitive in both national and international market.

Why GST is important?

GST has created a common market for the buyer, seller, importer and exporter without being into the geographical barriers. This has stabled the economy to a great extent as all the excluded taxes on the tax itself have been removed for the better economical market.

Whereas pre GST, the customer had to pay any taxes on the tax itself which negatively impacted on the Indian economy.

How does GST work?

Before reaching the consumer a product goes from many stages and process. Here is an example to draw the line on how GST works in India.

The important aspects of any goods in marketing is manufacturing, wholesale and retailing so usually if we see the implication of GST suppose: