What is E-Way Bill and How it Works?

What Are E Way Bills?

E Way Bill Full Form Electronic Way Bill (E-Way Bill) is a yielding mechanism wherein, through a digital interface or software, the person moving goods uploads the relevant information and data before the beginning of goods and produces an e-way bill on the GST portal. Eway Bill meaning is that an e-way bill is a receipt or a report published by a carrier giving specifications and instructions describing the shipment of a consignment of goods. The highlights incorporate the Consignor's name, consignee, the point of origin of the consignment or shipment, its purpose, and direction. The Eway Bill System for Inter-State transferal of goods across the nation was inaugurated on 01 April 2018. E-Way Bills is required for Inter-State transportation of goods of consignment result surpassing Rs.50,000/- in the motorized carrier.

When Shall an E-way Bill Be Generated?

An e-way bill must be produced before the goods are transmitted or dispatched, and it should incorporate aspects of the goods, their Consignor, recipient and transporter. Know how e way bill works and how e-way bill is generated online for:

How to Prepare E Way Bill and How Is E-way Bill Generated?

Note: The Consignor can approve the transporter/courier agency/e-commerce operator to fulfill PART-A of the e-way bill on their support. An online waybill should be generated irrespective of the amount of the consignment even if the amount is lesser than Rs.50,000 in two cases:

How to Generate E-Way Bill?

Any taxpayer who requires an eway bill download for the consignment must have admittance first to the Government portal. For the specific measures concerning the generation, you can visit this page. 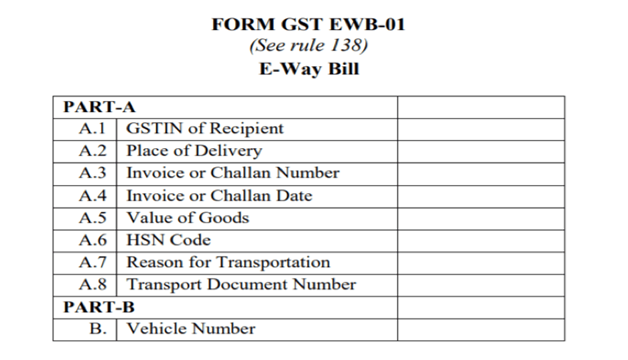 The validity of an e-way bill is determined from the date of its generation. Eway bill validity depends on two major things

Penalties for Not Carrying the Eway Bill

If the transporter is traveling without an e-way bill, he must be punished. There are two kinds of penalties which are taxed on the transporters as explained.

In this case when there is a movement of consignment without an invoice and e-way bill the transporter shall be penalized either with 10,000 INR or amount of tax evaded, whichever is higher.

When the taxpayer is failed to comply with the policies so mentioned the vehicle and goods can be detained and seized without any notice. However, both can be released if the owner wishes to pay the full tax or half the price of goods. To save the taxpayer from being penalized and hampering the supply of goods, organization or transporters can use Masters India’s integrated eway bill software. This software ensures that there will be a smooth movement of goods from one place to another.

Conditions When E-Way Bill is Not Required

There are some exempted goods which do not require an e-way bill. They are as mentioned

Check out the complete list of all exempted goods from e-way bill.

Q1. How to Generate Eway Bill Without an Invoice? Any taxpayer can generate e way bill online without an invoice if he has the following documents with them Invoice of tax paid, Credit Notes, Delivery Challan and Bill of supply or Entry. Q2. When a Taxpayer Receives Notice of Ewb Cancellation or Other Changes Made by a Transporter in Part-B? Every taxpayer who has produced the e-way bill will receive the information for the development in Part-B and any refusal or revocation done. This information will either appear on their designated mobile number or the email-id or both format. Q3. How Many E-way Bills Are Required for Most Consignments Sent Directly to the Vehicle? Every different consignment that is in the vehicle for the delivery must have various e-way. If the transporter or in charge deserts to determine the EWB, then the goods of that appropriate consignment can be stopped. Q4. How to Download E Way Bill? Various centres can create EWB they are mentioned below

Q5. Is It Possible to Generate a Bulk Amount of E-way Bills? Yes, any taxpayer or transporter who activated the automated platform for generating invoices can generate the e-way bill in bulk. Throughout this, the transporter or taxpayer, whichever the position may be, will be ready to abstain from their blunders as well the uncertainties of duplicate entries will also diminish.