The tsunami wave of GST was expected to turn the taxation habits and ecosystem, upside down. No wonder, it is giving bumpy rides, from the biggies of the business community to your local merchant. Though, the business community at large is wanting to comply with the GST norms to avoid interests and penalties and be in the good books of the government by maintaining a high GST Compliance Score, however, lack of accurate and timely information and after effects of ignorance are popping up as a real bottleneck. There is also a dearth of authentic GST professionals and the CAs and the finance professionals are still sharpening their knowledge on the subject. Be it the large corporate houses, the giant multinationals, the SMB segment and even the government departments, everyone is getting stuck at some stage or the other. Masters India have been flooded with the queries [mostly about the GST returns] and we thought to share the four common but fatal ones, which could really hit your bottom line liquidity and short term working capital.

Since GST’s inception, people have really been fuzzy about the implementation of its three heads – CGST, SGST and IGST and this is the most sought after query, which the deft team of GST professionals at Masters India addresses every day. An example would give you instant clarity:

The tax payers are paying under the wrong heads – IGST is being paid for the CGST liability or vice versa, which is causing severe ripple implications. The fault would look somewhat like this:

Now, when this blunder happens, the first query which the taxpayer has is – if he can set off the negative IGST balance against the excess funds in the CGST head?

The GST laws do not permit any intra-head transfer and so the answer to the above query is technically ‘No’. The only way to the above complexity is that the Global Electronics have to timely pay the negative IGST and the excess funds in the CGST can only be set off against the future CGST payments. Should for any reason, the company is not able to adjust the excess CGST, the request for refund of the same can also be made.

It could lead to a scarcity of working capital for a short term, however, if the figures are big, the interim term could also be painful and may have rippled consequences.

You would attract an additional tax liability, if the reverse charge is fed with incorrect values, erroneously though! Reverse Charge is a phenomena, wherein the recipient is liable to pay the GST, that too only by cash and not utilizing any Input Tax Credit.

Global Electronics was liable to pay Rs. 7,20,000/- as tax for the supplied made for Rs. 40,00,000/- at 18% tax. Now, if due to ignorance or say human error, Global Electronics posts this transaction under reverse charge, the purchasing company would be liable to pay the tax, leading to confusion, mess and may even pose threat to the business relationship.

Since the return once filed can not be revised, Global Electronics should now pay the additional tax and then claim the ITC of the same since, any tax paid under reverse charge is eligible to be claimed as ITC.

The aftereffects of such an accident would be similar in nature, as in the 1st error.

Any wrong move here, can devoid an exporter of the export benefits. To understand, when and how this error may happen, let’s take a quick dive into exports under GST. Exports under GST are treated as a zero rated supply and should not be jumbled with the tax rate being 0% on exports. It implies that there is no tax both on input and output. For a better clarity, let’s look at the different types of supplies under GST:

A routine supply of goods and services carrying a valid invoice [reflecting proper head – CGST/SGST/IGST], and which is captured properly in the GSTR-01.

Ignorance and ample clarity between the above three supplies, leads to interchangeably enter the values and so, an error. When the tax payer erroneously uses the exempted/nil rated supply in place of zero rated supply, they unknowingly devoid themselves to claim ITC, which could be a nightmare. The below snapshot of a GST return points to the correct entering column for the exports value: 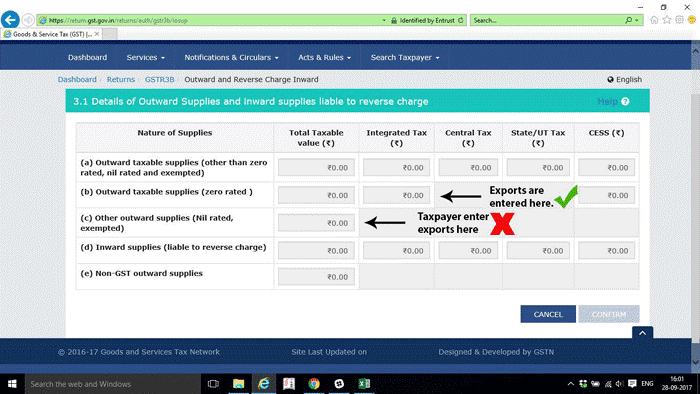 Not filing return in case of zero sales – serious damage:

Unlike the income tax, which had the flexibility of not filing a return, if there was no income; a GSTIN holder would have to file all the prescribed returns irrespective of no sales/zero sales. There is a flat Rs. 200/- penalty per day for not filing the returns timely. Assuming that you missed filing a return for a year and were exposed to the highest penalty, per return, per month which is Rs. 10,000/-, which including all the returns for a year amounts to [(3*12) * 10000 = Rs. 3,60,000/- and that too when you have zero sales. We truly hope that you will be more alert and involved while filing GST returns and at least not fall into the trap of the above 4 situations.