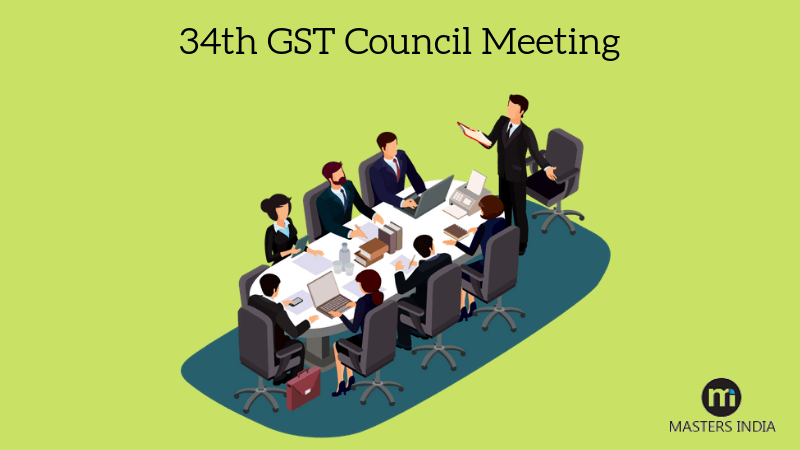 The 34th GST Council Meeting was held on March 19th, 2019 in New Delhi. Arun Jaitley, the Finance Minister of India, chaired the council meeting so as to examine and pass previously announced notifications. It was ensured that new schemes or rate cuts are not announced in the meeting.

The main topic of discussion for the 34th GST Council meeting revolved around tax rates applicability for housing construction projects and the rules that govern transitioning to new GST rates from old rates. The council also decided to implement the previous proposition of reducing the GST rate on real estate. These modalities of transitioning to new rates were decided in the recent GST Council meeting.

A new GST rate of 5% without ITC has been made available for new projects relating to the construction of all the other houses. Ongoing constructions of all other houses are also eligible for the new GST rate whether they were booked before or after April 1st, 2019. However, for houses booked before April 1st 2019, this new GST rate will be applicable on instalments which are payable April 1st 2019 onwards. The new 5% GST rate also applies to the construction of commercial apartments in Residential Real Estate Project (RREP) whose carpet area is lesser than or equal to 15% of the all apartments’ total carpet area.

The 34th GST Council meeting however made these tax rates available on certain conditions. Apart from making ITC unavailable, 80% of the input goods and services for the construction are to be purchased from registered suppliers. In case the minimum limit of 80% input is not reached, the builders will have to pay 18% tax on the basis of RCM (28% for cement and applicable taxes on capital goods under RCM). These inputs do not include capital goods, FSI, long-term lease, and TDR/JDA.

The 34th GST Council meeting also decided to provide a one-time option to bookings and construction of houses which had started before April 1st 2019 and have not been completed by March 31st 2019. This one-time option will allow the promoters to continue tax payment at old rates of 8% or 12% for the said houses. The promoters must opt for the said option in the specified period of time or else the new GST rates will be applied to the projects automatically.

For ongoing construction projects which are willing to opt for the new tax rates, a transition of ITC will be required in the manner prescribed by the GST Council. This transition will be done on a pro-rata basis. The GST Council approved a transition formula for residential projects which extrapolates the ITC which was availed for the percentage of construction completed by 1st April 2019 so as to arrive at the ITC available for the whole project. Thus, the ITC eligibility will be determined based on the percentage of flats booked and invoicing done.

However, for mixed projects, transition of ITC will be allowed on a pro-rata basis proportionate to the commercial portion’s carpet area in ongoing projects (12% tax payable with ITC even after April 1st, 2019) with respect to the project’s total carpet area.

The 34th GST Council meeting decided that in case a landowner supplies TDR, FSI, and long-term lease to the developer, it will be exempted from tax. However, the tax exemption will pertain to the condition that the constructed flats are sold before a complete certificate is issued and the applicable tax is paid for it.

If flats are sold after the completion certificate is issued, then there will not be any tax exemption. The new GST rates of 1% for affordable houses and 5% for other houses will be applicable for the same. The builder will also bear the liability to pay tax under RCM on the issue date of the completion certificate. Application of RCM will shift the liability of tax payment from landowner to builder for supply of TDR, FSI, and long-term lease premium.

The 34th GST Council meeting also signaled at the amendment of the ITC rules so as to make the monthly and final determination and reversal of ITC in real estate projects clearer. This would provide to commercial units a set of clear procedures for availing ITC because these units will remain eligible for availing ITC in mixed projects.

The aforementioned decisions taken by the GST Council in its 34th meeting will come into effect from the beginning of the Financial Year 2019-20, i.e. April 1st 2019 onwards.