Impact of GST on Logistics Industry

As a sector that holds together a countless number of manufacturing and trading activities in the country on a daily basis, and is forever attempting to bridge the shaky gap between increasing consumption and timely supply, it would hardly be an understatement to consider logistics as the backbone of the rapidly shape-shifting Indian economy. The congruence of infrastructure, technology and multiple service providers is what makes up the playing field of the logistics industry, which effectively helps facilitate timely, safe and proper delivery of goods and services to the end consumer via a robust supply chain. Therefore, it is important to understand the Impact of GST on Logistics.

Admittedly, the sudden explosion of the e-commerce boom in an erstwhile sluggish economy meant that the stakeholders in this space have had to deal with far more complicated processes and multi-layered factors involved in figuring out the logistics of bulky items, something that has drastically changed the rules of the game in this industry and begs for fast adaptability. Making hundreds of decisions based on size, weight, capacity parameters to ensuring proper storage of goods and even navigating unpredictable climate conditions, in addition to keeping the costs down, are daily challenges players in this field grapple with, making the logistics sector a domain where the stakes are high for everybody – both the traders/suppliers and the consumer.

It comes as no surprise then that the Indian logistics industry is expected to surpass $200 billion by 2020, as per a JLL study.

And augmenting this projected growth is the much-debated Goods and Services (GST) tax which finally rolled out this 1st of July 2017 – underlined by the “One Nation – One Tax” philosophy and promising a streamlined tax and credit system. Wide-ranging provisions such as State Goods and Service Tax (SGST), Central Goods and Service Tax (CGST) and Integrated Goods and Service Tax (IGST) are the centre of the GST structure, doing away with a chaotic tax structure that till some time ago routinely imposed miscellaneous taxes such as value-added tax (VAT), OCTROI, Excise tax and others. In short, GST seeks to simplify the tax regime of the country, via imposition of one indirect tax in India, thereby reducing a sizeable portion of the burdens borne by commercial participants in the field.

However, before we delve into the possible impact of GST on the logistics industry, it would be prudent to first take a brief look at the current scenario shaping the present-day context of this sector.

The Indian logistics sector is neatly divided into two key segments: freight and passenger transportation, and warehousing and cold-storage. A blend of the inbound and outbound services sourced by manufacturing and supply chains, it is a vast playing field that has to date, mostly failed to deliver as per its potential, primarily due to infrastructural mismanagement.

Unevenly distributed infrastructure leads to under-utilization of key resources while unnecessarily burdening the other components. The graph below, based on statistics reported by the India Brand Equity Foundation (IBEF), is indicative of the road and rail transport bearing the weight of the industry’s burden, while air and waterways remain grossly underutilized. 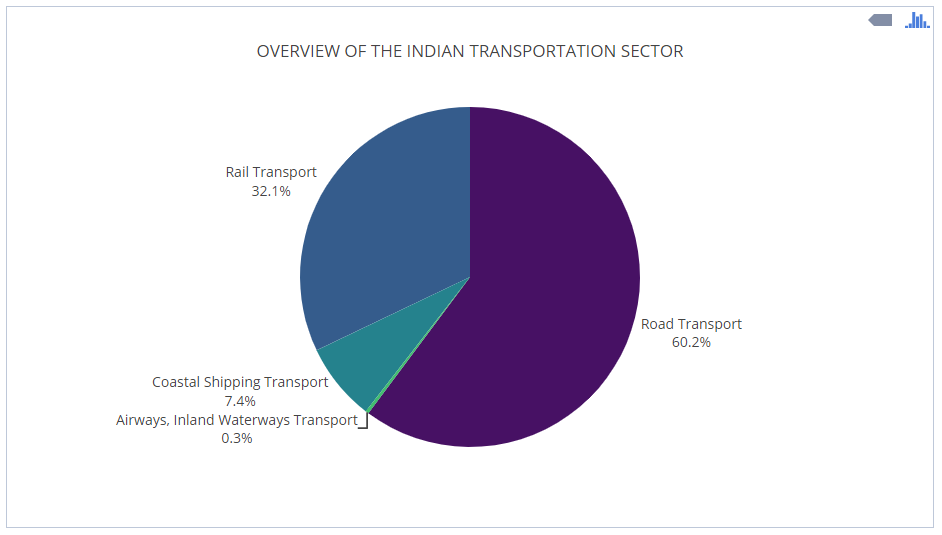 A glaring disconnect between transport networks, software and equipment and warehouse facilities further fuels more disorganization in this industry, leading to volumes of largely preventable waste.

However, these are not the only challenges that plague the Indian logistics industry. Some of the other obstacles in this respect are:

How and where is GST expected to fill the gaps?

While it is too early to consider GST as an absolute saviour in the face of the numerous challenges cited above, this radical shift in the country’s taxation policy admittedly has some indisputable benefits to offer. Some of these have been described below:

A Summary of the advantages accrued from the enactment of GST by and large points to three key expected results – optimal utilization of all equipment and components involved in running the logistics industry, a seamless tax-credit system that does away with the duality and cascading effect of multiple taxes and significant cost reduction in logistics by almost 20%.

Negatives of the policy cannot be discounted as such – for example, fuel, which is a prime element factoring into present-day inflated costs of transportation, still lies outside the ambit of GST, and it may continue to be so for some time before the egregious taxes on the same are lifted off. Similarly, the concept of E-way bill, while promising better regulation and monitoring of the logistics sector, may still come under the scanner for inviting needless bureaucratic intervention, the very thing plaguing the segment at this point in time.

However, if one were to weigh the pros and cons of the reformed tax policy, it would come to light that the benefits far outweigh the negatives. In any event, the impact of GST cannot really be pigeonholed as it will most likely have far-reaching effects on business and consumerism as a whole – from pushing commercial players to adopt technology and advanced tools (such as automation) bringing in more precision in the logistics chain, to neatly organizing warehousing and freight machinery and optimizing their geographic strengths, from providing the much-needed thrust to existing participants looking to scale up, to making the industry accessible to new entrants;  mergers, acquisitions, domestic and foreign investments galore; GST is a disruptive force on the surface of the current ecosystem that spells much hope, efficiency and prosperity for the entire logistics sector in general.