GSTR-3 is a monthly GST return to be filed by 20th of every month, by all regular taxpayers registered under GST in India. GSTR-3 is an accumulation of outward and inward supplies during the previous month, which will be auto-populated via GSTR-1 and GSTR-2.

The article aims to apprise you in depth about the applicability and scope of GSTR-3, GSTR 3 format, GSTR form.

Mostly, the headings under GSTR-3 are auto-populated fetching data from GSTR-1 and GSTR-2 and hence will involve minimal time to fill in. There are 15 headings which form the framework of GSTR-3, detailed as under: 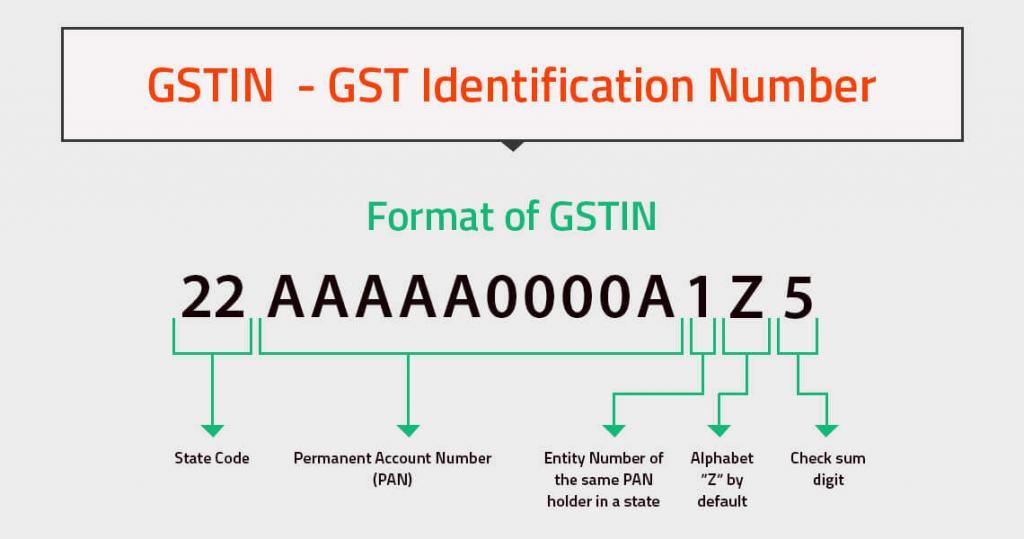 2. Name of the Taxpayer:

There are 2 parts of GSTR-3. Part A auto-populates from GSTR-1, GSTR-1A and GSTR-2. Part B needs to be filled manually.

This comprises of the overall turnover of all the supplies, segregated in: 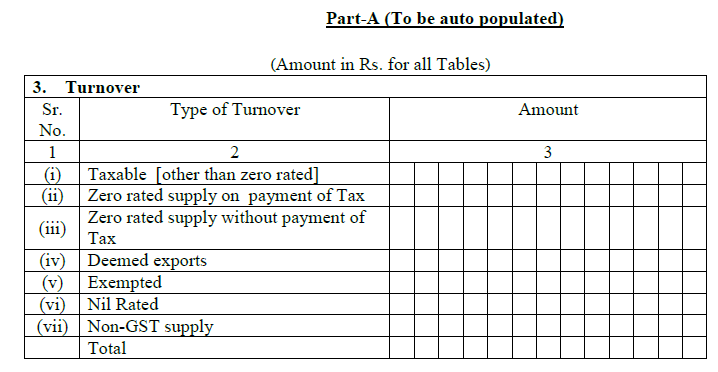 It is an auto populating field, which fetches data from GSTR-1 and comprises of a snapshot of the entire sales during a month.

4.1 Inter-state supplies [net supplies for the month]: The total inter-state sales is captured here under the following heads:

A. Taxable supplies except reverse charge and zero rated supply:

B. Supplies attracting reverse charge-tax payable by recipient of supply:

It comprises of sales, where the buyer will be paying GST under reverse charge.

Comprises of exports paid through IGST and reclaimed as refund.

D. Supplies made through an e-commerce operator liable for TCS, out of the supplies mentioned in A:

** The zero rated supplies, which are made without paying the GST will not get included, like exports through bond / LUT.

** Amendments of supplies originally made under reverse charge basis will not be included in table 4. 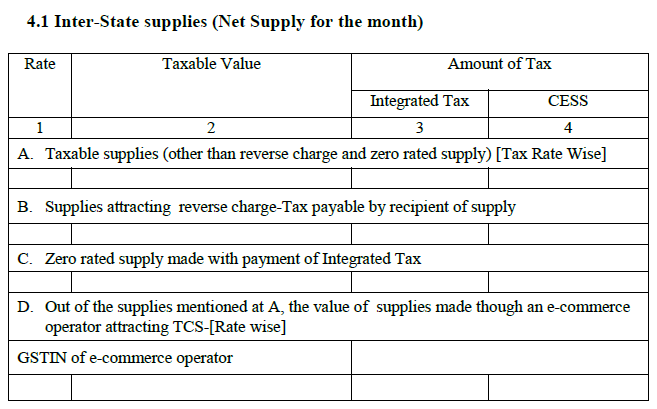 This is a replica of the above heading and the only difference is that it will capture the details of the intra-state sales. 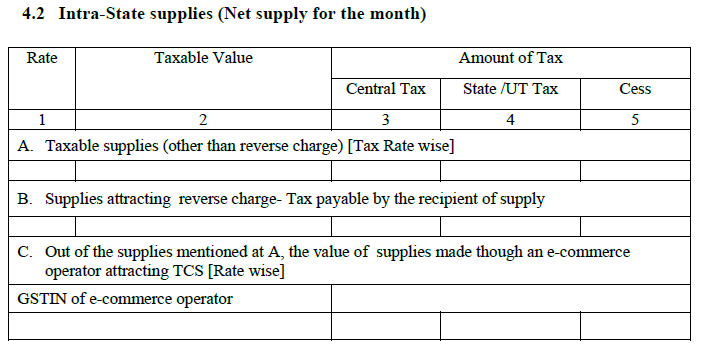 4.3 Tax effect of amendments in terms of outward supplies:

Any changes made to the sales invoice will get captured here. Changing the invoice amount has a direct impact on ITC, which in continuation impacts the revenue of the government. This heading basically aims to capture any such change and its ripple effects. 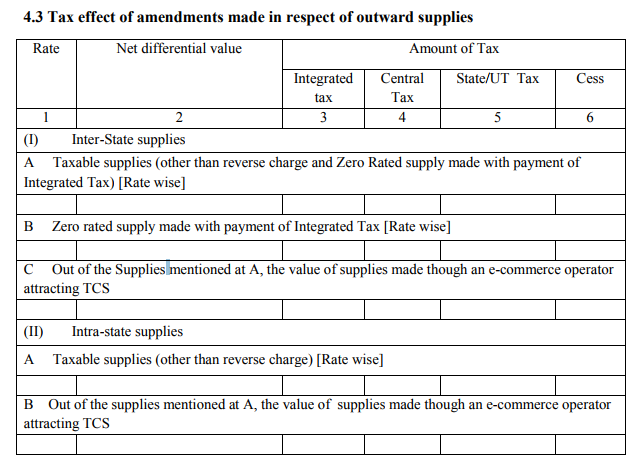 5. Inward supplies with reverse charge including import of services [Net of advance adjustments]:

This heading will auto-populate and fetch data from GSTR-2 comprising of all the [purchases made + supplies received] during the month.

5A. Inward Supplies with tax payable on reverse charge:

5B. Tax effect of changes in terms of supplies with reverse charge:

It will capture the purchase amendments [excess / under payment] attracting reverse charge. This heading is basically meant to keep a track of the changed purchase invoices and also capture the change in the tax amount therefore. 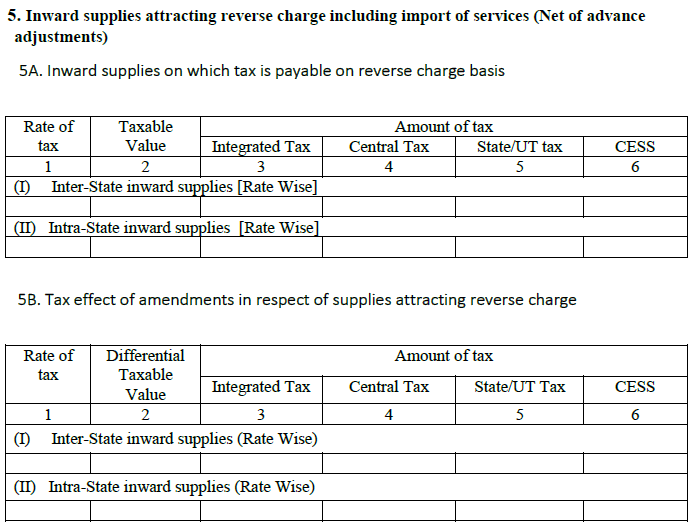 Part I: It will individually show the summarized ITC for a calendar month under:

This heading will also reflect the ITC received from a Input Service Distributor after the adjustment of the debit/credit notes.

Part II: It will show the changes made to earlier month’s details [if any] and their subsequent impact on ITC. 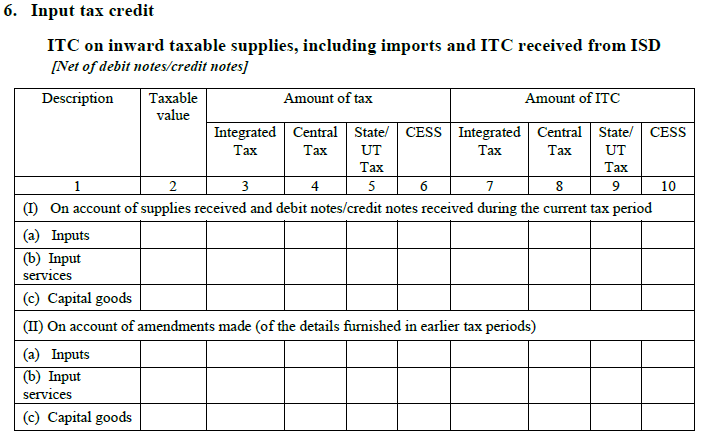 7. Addition/reduction in output tax for mismatch and other miscellaneous reasons:

This will fetch data from GSTR-2 about any sort of amendments in output tax [+/-] and the subsequent tax liability between the original return and also the current month’s changes.

The mismatch of invoices may result in the double claiming of ITC. The ITC claimed in excess due to doubling of invoices will be reversed and added to the overall tax liability.

B. ITC claimed on mismatched/duplication of credit notes:

ITC will also be impacted by the incorrect or duplication of credit notes. Excess ITC claimed due to this will be reversed and added to the overall tax liability.

When the mismatch leads to claiming of lower ITC, the balance amount gets deducted from the overall tax liability. This heading is just the opposite of point ‘a’.

This happens when the tax is paid in excess previously and so will get reduced from the overall tax liability.

F. Advance taxes paid previously and adjusted with the tax on supplies in the current month:

This heading mentions the amount of advance tax paid in the previous months for the supplies made in the current month.

This heading captures the ITC being refunded for any other reason. 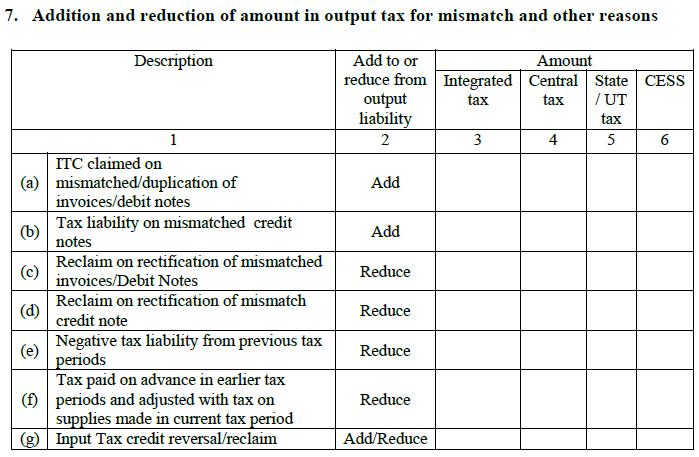 This is the deciding section, which tells you, how much total tax has to be paid and under which tax head – CGST/SGST/IGST segregated into the following headings:

The tax on normal sales including the inter-state sales is mentioned here.

8B. Inward Supplies under Reverse Charge:

Tax on purchases under reverse charge is mentioned here.

This field fetches data from the table 11 of the GSTR-2 and provides the additional tax payable or any reduction available incurring due to the ITC reversal.

8D. For reasons of mismatch:

Tax liability arising due to the mismatch, rectification or any reasons come here. 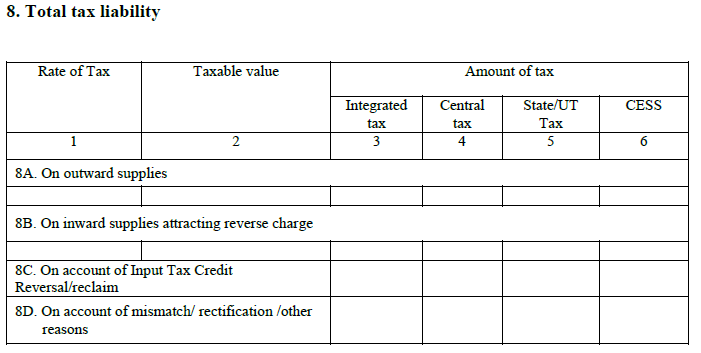 TDS and TCS will be deducted from the overall tax liability to ascertain the tax amount to be paid.

Interest @18% per annum is applicable on any delay of tax payment and is calculated on the outstanding amount of tax only. Next day of filing [20th of every month] to the date of payment is to be considered as the time period for calculating the interest.

The heading captures the reason and the amount of interest payable.

Any change in sales invoice increases the tax liability and interest is applicable on the increased amount.

Any increased change in the tax liability arising due to a change in the purchase invoice and where ITC was also claimed is captured here. Interest is payable on the increased amount.

Any part payment of the interest leads to a balance interest liability, which is carry forwarded.

Any late payment in tax or delayed tax return filing is captured here.

The aggregated interest payable under CGST, SGST and IGST. 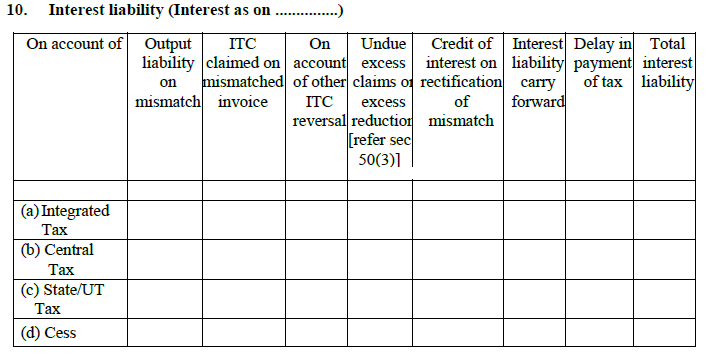 A late fees from Rs. 100/- up to a maximum of Rs. 5000/- is also liable to be paid along with interest on delayed return filing. However, there is no late fees on IGST.

Part B [To be manually filled]

Any amount paid as interest or late fees will come here with the bifurcation of tax heads.

Any excess payment of tax would be duly returned to the tax payer.

Once everything is filled, a declaration is to be electronically signed authenticating that all the given information is proper and accurate.

What if GSTR-3 is not filed / filed late?

If GSTR-3 is not filed, then the GSTR-1 of the next month also could not be filed leading to heavy penalties and fines.

Interest @ 18% per annum and late fees, both are applicable in case GSTR-3 is not filed or filed late.

The interest is computed on the amount of outstanding tax and time period will be considered from the next day of filing [21th of the month] to the date of the payment.

Can GSTR-3 be revised?

No, GSTR-3 once filed cannot be revised since the majority of the portion in GSTR-3 auto-populates through GSTR-1 and GSTR-2. Any unintentional error, if somehow made, can only be mended in the next month’s GSTR-1 and GSTR-2 returns.

Due date for GSTR-3:

The latest announcement of the GST council via notification # 29/2017, dated 5th September’17 directs that:

A 5 day gap is gap in given between filing GSTR-2 and GSTR-3 to address any buyer-seller mismatch and discrepancies.