Filed Wrong GSTR 3B. How Should I Correct This?

Form GSTR-3B has been made the soul of the GST Act, 2017 vide Notification No.56/2017-Central Tax, dt. 15-11-2017 that seeks to mandate the furnishing of return in FORM GSTR-3B till March 2018. So, it becomes very important to correctly file GSTR Form-3B. Next, in this article we'll provide useful information on topics like how to reverse excess ITC claimed in GSTR-3B, how to rectify GSTR 3B, excess ITC claimed in GSTR 3B, how to amend GSTR 3B, how to reverse ITC GSTR-3B wrongly submitted, the penalty for wrong filing of GSTR-3B, can GSTR 3b be revised, how to revise gstr-3b after filed 2021gstr 3b amendment and much more.

Vide Circular No. 07/2017 dated 01-09-2017 the detailed procedure for reconciliation of information furnished in FORM GSTR-3 and FORM GSTR-3B was explained.

If the registered person intends to amend any details furnished in FORM GSTR- 3B, it may be done in the FORM GSTR-1 or FORM GSTR-2.

Where the tax payable by a registered person as per FORM GSTR-3 GST entry is more than what has been paid as per FORM GSTR-3B, the common portal would show another instance of Table 12 for making an additional payment of taxes which can be paid by debiting the electronic cash or credit ledger along with applicable interest on delayed payment of tax starting from 26th day of August 2017 till the date of debit in the electronic cash or credit ledger.

Where the output tax liability of the registered person as per the details furnished in FORM GSTR-1 and FORM GSTR-2 is less than the output tax liability as per the details furnished in the FORM GSTR-3B and the same is not offset by a corresponding reduction in the input tax credit to which he is entitled, the excess shall be carried forward to the next month’s return to be offset against the output liability of the next month by the taxpayer when he signs and submits the GST return in FORM GSTR-3.

However, simultaneously, if there is a decrease in the eligible input tax credit, the same will be adjusted against the above mentioned reduction in output tax liability and the balance, if any, of the reduction in output tax liability shall be carried forward to the next month’s return to be offset against the output liability of the next month.   But will not be liable to pay any late fee provided the requisite return in FORM GSTR-3B was submitted on or before the due date.  The return shall be considered to be a valid return when the tax payable as per FORM GSTR-3 has been paid in full after which the return shall be taken up for matching.

For the very first month of GST Regime i.e. July 2017, only “SAVE GSTR3B” button and “Submit” button was available on the GST Portal where we could edit and “Save GSTR-3B” any number of times, but once we “SUBMIT”, the input details got frozen.

There was no way to revise "how to correct wrong GSTRhow to revise gstr 3b after filed 3b filed" once it has been submitted.

As many taxpayers as we as professionals faced hardships due to this freezing of the figures after clicking on the “Submit” button, Govt. consequently from August 2017. brought out with another option to “Preview and Submit GSTR 3B” to provide ease to the taxpayers wherein we can preview the data input by us and then “Confirm and Submit”. 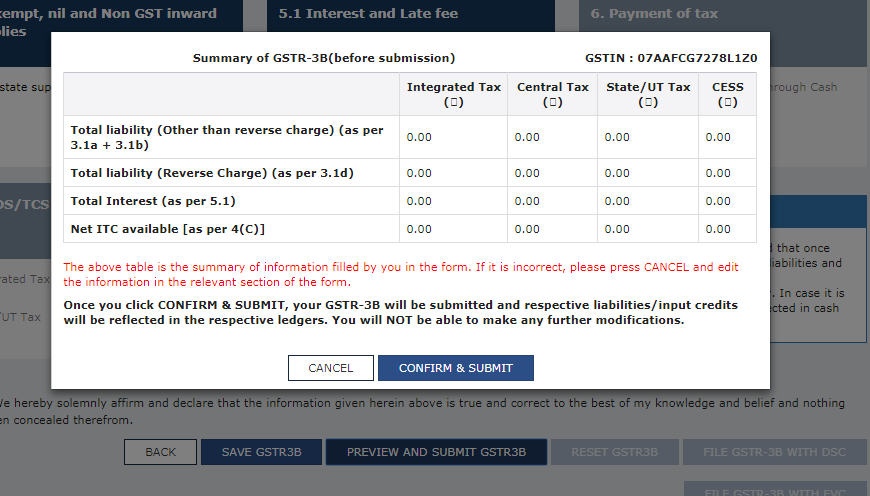 So, in the nutshell, we conclude that though till now there is no revision facility available for GSTR-3B and the only possible resolution to correct it is via GSTR-1 and GSTR-2 in case the figures got wrongly input by us while submitting the GSTR-3B. However, it is expected by GST Network to operationalize the editing facility for GSTR-3B returns by 21st November.