Common Errors Committed by Taxpayer on the E-Way Bill Portal

E-way bill portal was successfully launched by the government of India on 1st April 2018 after a failed attempt in February 2018. This e-way bill portal helps the taxpayer to track consignments that are in transit. E-way bill portal has been working smoothly without any glitch since its implementation.

Even though the e-way portal is seamless, most of the taxpayer including consignee, consignor or transporters are making error in e way bill generation on this portal. These errors hamper the supply chain of businesses and can also lead to penalties which will directly affect the goodwill of the taxpayer in the market.

This is the common eway bill error which every taxpayer makes. As of now, there are no such provisions in the current e-way bill portal to collaborate all the invoices and generating one e-way bill for the collaborated invoice.

As per the provision, for each invoice, every taxpayer shall generate one e-way bill. This rule applies on all the taxpayer whosoever is generating the e-way bill on the portal. In case if the transporter is carrying multiple consignments on the same vehicle then he has to generate a different e-way bill for different consignment.

Inappropriate use of bulk generation facility

It has been seen that while conversion of invoices using excel utility the taxpayer tends to use the same excel template without removing the previous details properly. This leads to duplication or incorrect e-way bill generation.

While entering the Vehicle details in the Part-B of the e-way bill, the transporter, consignor or consignee whichever the case may sometime furnish the wrong vehicle number. This error in eway bill leads to wrong e-way bill generation and can also lend the transporter in trouble while the transit.

Let us see the correct format of vehicle number in the Part-B of the e-way bill: 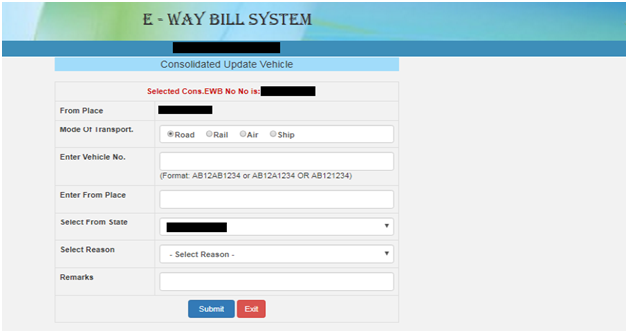 Not furnishing the details of Transporter

Every taxpayer shall furnish the details of the transporter including ID and vehicle number which will be used for the movement of goods. These details shall be entered in the Part-B of the GST e-way bill in the case when the goods are being moved by the third party or any transporter.

But sometimes the taxpayer forgets to mention the details of the third party transporter and generates the e-way bill.

Not able to track the validity of the e-way bill

In some cases, the person or the taxpayer who is responsible to generate the e-way bill at a different place of business uses different users ID. In such cases, conflicts arise in the e-way bill which has been generated by different user ID as it contains incorrect GSTIN or invalid GSTIN in e way bill.

As per the provision of the e-way bill any third party can enrol and generate the e-way bill on either specialized automated solution or e-way bill portal. In this person includes

In such situation sometimes the third party forgets to mention their GSTIN due to which businesses or the taxpayer is not able to maintain the proper record of the e-way bill.

Most of the time the taxpayer or the company uploads the wrong documents such as invoice, delivery challan, bill of supply. In such cases, the wrong e-way bill is generated. If the goods during the transit get inspected by the appointed personnel the company faces many challenges such as

Furnishing wrong details of the company

Sometimes the company or the taxpayer enrol or enlist themselves with a different name on e-way bill portal and then they generate an e-way bill. In this case, if the consignment gets checked while transit, heavy penalties get levied on them. This can also create a problem at the time of assessment and audit of the company.

Above mentioned common errors can be rectified by just integrating an automated solution on ERPs such as SAP, Oracle and Microsoft Navision.