How to Calculate Distance in the E-Way Bill

E-way bill is an electronically generated bills which shall be mandatorily carried by the person-in-charge while the movement of goods whose value exceeds the threshold limit of 50,000 INR. The e way bill validity extension is for a certain period of time (eway bill validity time) which depends upon the distance and type of cargo used in the movement of consignment. However, distance calculator for e way bill has become easier. These days, all the toll booth officer will have to do is enter the PINs of the place where the journey began and the place like pin to pin distance. In accordance with PIN codes, e-Way bill devices will be able to measure and display the maximum distance a car can travel between provider and receiver. The same latest amendment is the facility provided by the driver to enter the actual distance traveled while delivering goods in ewaybill distance calculator. However, this facility does not allow the driver to change the total distance traveled by a large border. As a network company responsible for the safe and smooth flow of goods, it will be limited to 10% increase over the already calculated distance. For example, if the distance e way bill between points A and B is 900 km, the user can enter a maximum distance of 990 km (900 km + 10% of 900 km). As a rule, one day is added e way bill validity for 200 km. EWB qualifying period for every 200 kilometers, and another day is added to each 200-kilometer segment. For example, if the estimated distance is 310 km, the eligibility time is 1 + 1 days. For Over Dimensional Cargo (ODC) transportation, legalization is one day for every 20 kilometers (instead of 200 kilometers), and an additional day is added for every 20 kilometers or part thereof.

In case there is a movement of goods where the distance is more than 3000 KM then the validity of the e-way bill in GST distance calculator shall be extended to avoid the penalty.

The e-way bill is not valid for the movement of the consignment unless the details of the transporter and the vehicle details are furnished in Part-B of the e-way bill. But there are some exceptions where the vehicle's details may not be furnished. This exception includes

When there is a movement of goods where distance is less than 10 Km in e way bill km calculation within the State or Union Territory from the place of the transporter to the place of the consignee.

The e way bill time limit validity can be extended either

How to extend validity of e way bill? 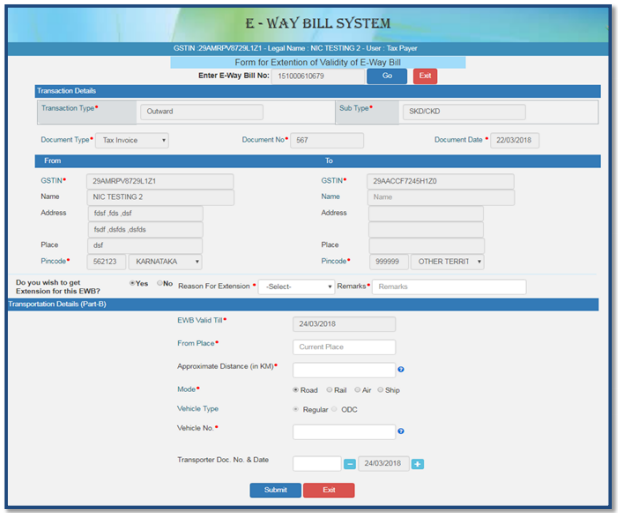 Once the taxpayer is done with the procedures of extension of the validity, a new e-way bill number is generated in place of the old e-way bill. It shall be noted that a taxpayer can extend the validity of EWB "n" no of times.

Frequently asked questions
What Is the Distance for an E Way Bill?

In simple words, an e-way bill once created will be valid for 1 day for up to 200 kilometres of travel. For every 200 km. or part thereof thereafter, one additional day will be allowed.

Is the E-way Bill Required Within 10 Kms?

Yes, e-way bills are required to be generated even in case of movement of goods within 10 km.

Which Fields Are Auto Calculated in Waybill?

However, e-waybill system is adding a new feature i.e. auto calculation of distance in waybill. This feature will auto-calculate the distance between the supplier and the recipient based on postal pincode of source and destination location

How Do You Find the Distance Between Two Pincodes?