Amongst a plethora of amendments in the last and the 22nd GST Council meeting on 6th October, textile and jewelry sectors must have felt their share of cool breeze. As the jewelry sector witnessed the much needed softened KYC norms the issues of the textile industry [specifically synthetic yarn makers] pertaining to the delayed clearances and fuzziness in the export related tax refunds and an inverted duty structure [ raw material being taxed at a much higher rate vis à vis the output].

Two major relaxations made in the textile industry are:

The relaxations have a ripple effect and the following stocks which are supposed to see a spring effect, must be tracked diligently: 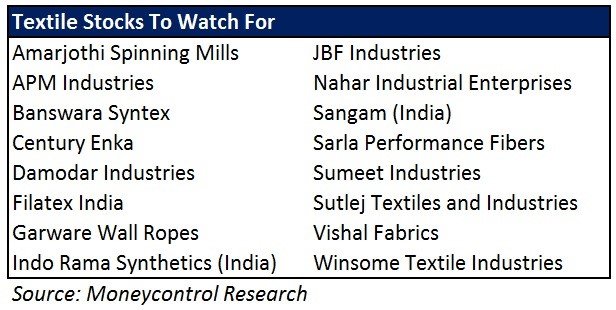 The jewelry sector was also breathing low since demonetization, the complex KYC norms and the recent GST induced intricacies.

The following announcements just before the festivities are supposedly seen to boost the tempo:

The amendments are supposed to alleviate the overall demand, though mostly for the small and local players. A microscopic watch should be kept on the following jewelry stocks, which are supposed to get a shot in the arm:

As reported in Money Control.