Lost your password? Please enter your email address. You will receive a link and will create a new password via email.

You must login to ask question. 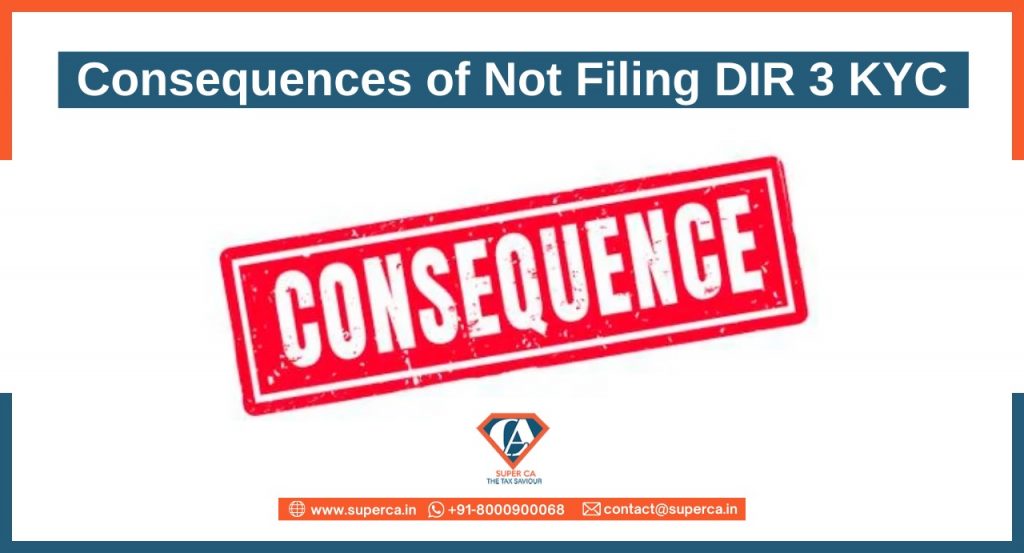 Director identification number (DIN) refers to a unique identification number that is given to a person desiring to be a director or an existing director at the time of company registration. In this digitised era, application in eForm DIR-3 was sufficient to obtain DIN. For any individual who wants to be a director in one or more companies, this was only a one time process. However, now with the move of the MCA to update its registry, all directors with a DIN will have to submit their KYC details annually in eForm DIR-3 KYC.

This annual KYC for all DIN holders has been made mandatory by the MCA w.e.f. 10th July 2018 by including Rule 12A to Company registration Appointment and Qualifications of Directors) Rules, 2014. This compliance is pertinent to every person enduring DIN with ‘Approved’ status and also to those who are disbarred.

There is a dual intention behind KYC of individuals holding DIN, firstly to assure updated data is available in the reports of the Government in respect of each individual who is holding the DIN and further to deactivate DIN’s, which are not being used and where renewed data is not available. There are several consequences of non-filing of the form which we’ll talk about in the article.

Who has to File Form DIR 3 KYC?

Since it’s a mandatory annual requirement, every DIN holder has to achieve compliance with respect to each financial year. Every director who has been allotted a DIN on or before the end of the financial year and whose DIN is in approved status will have to file form DIR-3 KYC before 30th September of the immediately next financial year.

Impact of not filing eForm DIR-3 KYC within the deadline

All Individuals who have not filed DIR 3 KYC, can file the same anytime by paying a one-time filing fee of Rs. 5,000 as ROC Fees as prescribed under Companies (Registration Offices and Fees) rules..

But till then, MCA will temporarily deactivate the DIN of the Individual who has failed to fill the KYC form with status as ‘Deactivated due to non-filing of DIR 3 KYC’ and will reinstate the DIN upon the filing of KYC. As a result, the Company will not be able to file any forms containing the DIN of the Individual whose DIN is deactivated due to non-filing of DIR 3 KYC including INC 22A Form. Companies shall not be able to file an annual form like AOC-4 and MGT-7 with ROC and any other form with DSC of the director whose DIN has been deactivated. Further, Till the time he can’t be appointed as a director in any new Company or LLP which has got their company registration and can’t resign from any Company or LLP.

Further, there are many provisions of the Companies Act, 2013 and LLP Act, 2008 that provide for the requirement of Directors or as a Designated partners to sign documents under the respective Act with DIN. Now, with the deactivation of DIN, the company shall not be able to get any dox signed from such Director and mention his DIN no.

The documents needed at the time of filing form DIR 3 KYC are:

➔ Details of Nationality and Citizenship details like gender, and date of birth.

➔ Passport (mandatory if a foreign national is holding a DIN).

Apart from the items mentioned above, please keep the following things ready:

➔A declaration has to be provided by the applicant duly attested by practising professionals.

The applicant must make sure to get these forms attested too before uploading:

➔ Attestation of the documents mentioned above from Practising Professionals such as CA, CS, or Cost Accountants. In the case of Foreign Nationals, documents need to be attested by the prescribed authority. Like online company registration. Filing DIR 3 KYC is also an online process.

Any other optional attachments should be digitally signed by the applicant.

After offline or Online company registration, all the Directors holding DIN must maintain compliance with the new mandatorily form as a failure of this will cause hindrance in the smooth functioning of the firm after company registration and also cause discomfit to the Individuals. Further, Disqualification as per the Companies Act, 2013 is covered under Section 164(2) whereas DIR 3 KYC is an annual requirement thus failure to file the KYC form will not amount to disqualification of Directors which is a whole different thing. All these basic things you would be told at the time of offline or Online company registration.