Games shows, Puzzles and Lotteries have been in trend for quite long. This can be a source of income for few. It is imperative to know the taxation rules before accepting these prizes/gifts.

In this article, we will discuss the Income Tax rules applicable on any income earned through winnings from lottery, crossword puzzles, card games and other games of any sort.

How Is Prize Money Taxed?

The Income Tax Act was amended to add Section 194B. This section taxes income from:

Under this section, any income earned from any of the sources mentioned above will be taxed at flat 30% if the value of the prize is more than INR 10,000. The Secondary and Higher Education Cess of 4% will be added to the tax amount, thus making the effective rate of tax as 31.2%. An additional surcharge of 10% is also applicable if the prize amount is more than INR 10 lakhs.

Note: Here, the income is taxed without any basic exemption limit.

Who Should Pay Income Tax On The Prize Money?

For example, Mr Anand won INR 1,00,000 in a lucky draw conducted by ABC company. Here, the ABC company will deduct TDS at 31.2% and give Mr Anand only the balance amount.

How To Disclose Winnings In The Income Tax Return?

As mentioned above, the value of the prize money has to be disclosed as ‘Income from Other Sources in the Income Tax Return (ITR) of the receiver.

When Mr Anand files his Income Tax Return, he will have to disclose INR 1,00,000 under the head ‘Income from Other Sources’. While calculating taxes, he can utilise the credit of TDS deducted u/s 194B in this regard to set-off the tax payable.

Note: No deductions under chapter VI A or any other chapters/sections are allowed from such income. 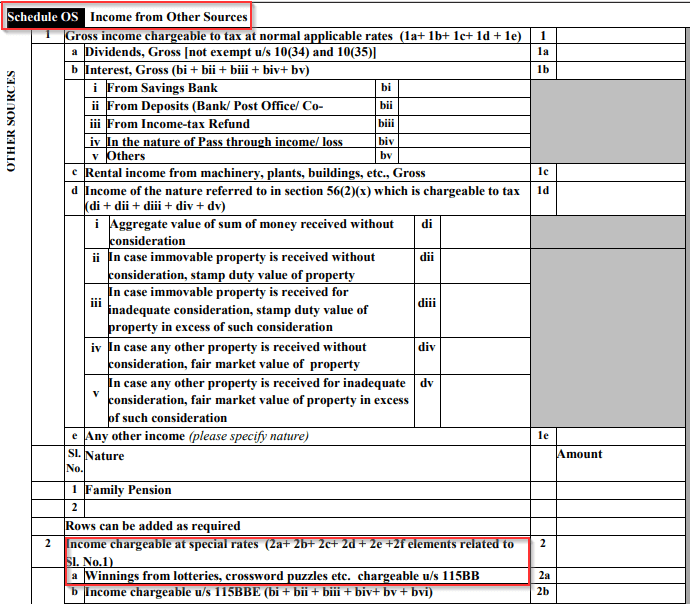 All prizes need not be in monetary form. Some prizes may be movable/immovable assets. For example, Mr Anand won a Car in the lucky draw conducted by ABC Company. The Fair Market Value of the car is INR 8,00,000. ABC Company will have to remit tax at 31.2% on INR 8,00,000 to the Government before releasing the prize. This tax which is remitted by the company, will be recovered from Mr Anand as prizes are taxable in the hands of the receiver.

Furthermore, if Mr Anand accepts the prize, he will have to disclose the FMV of the car in his ITR under Income from Other Sources as mentioned above.