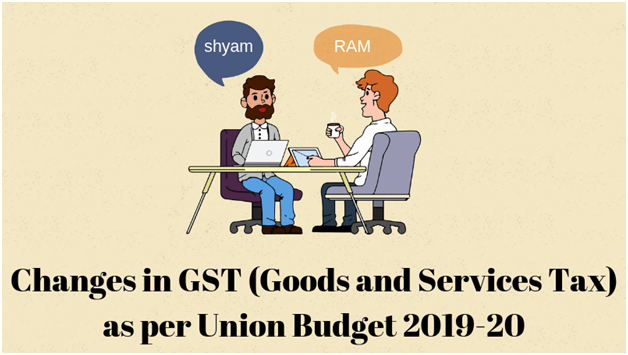 To understand the changes in GST (Goods and Services Tax) as per Union Budget 2019-20, we are taking two fictional characters into consideration namely Ram and Shyam.

Ram: Shyam, what are the major GST changes in Union Budget?

Shyam: Ram, this union budget 2019-20 is a more sensible budget than a sensational one. Some of the major GST changes are

Change in the calculation of interest

Sabka Vishwas Legacy Dispute Resolution Scheme and so forth.

Ram: Shyam, what changes are made in the calculation of interest under GST as per this budget?

Shyam: Ram, new proviso in Section 50 (1) has been inserted in the CGST Act. According to this new proviso, interest will be charged only on the net cash tax liability. However, it shall be noted that this will not cover those cases where GST returns are filed after initiation of any proceedings under section 73 or 74 of the CGST Act.

Oh! Ram, you must be thinking what I am talking about so let us understand this with an example:

Ram: Shyam, is there any new changes regarding the tax payment made under the incorrect head?

Shyam: Ram, there is an insertion of the new subsection in Section 49 of CGST Act using which a taxpayer can transfer amount from one head to another (either major or minor) in the electronic cash ledger. In simple words, a taxpayer can adjust tax, penalty, interest, late fees wrongly paid in CGST in IGST, SGST/UTGST and vice versa as the case may be.

For instance, if a taxpayer has incorrectly paid liability of 50,000 INR under CGST head which ought to be paid under SGST. Now the taxpayer can transfer this 50,000 INR from CGST to SGST in the e-cash ledger.

Shyam:Ram, Sabka Vishwas Legacy Dispute Resolution Scheme is a very unique and substantial relief scheme that has been proposed by the government. This scheme will help in reducing the litigations and free the block funds of pre-GST laws. Under this scheme, the taxpayers will get relief of up to 70% in disputed tax dues and 100% relief on late fees, interest and penalty provided that they have fulfilled the specified terms and conditions.

Ram: Shyam, what is the conclusion of these GST changes?

Shyam: Ram, this new budget has made changes in GST that were long due, a taxpayer can now settle the incorrect payments under different heads easily in e-cash ledger and get rid of old litigations through Sabka Vishwas Legacy Dispute Resolution Scheme. Thus, we can conclude that this is the first step towards litigation free era in the Indian taxation system.